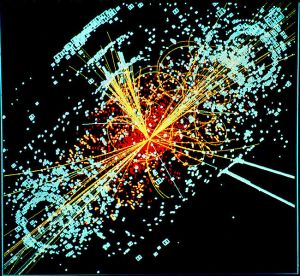 I was really excited today when I learned this morning that CERN scientists have finally “discovered” the illusive “Higgs Boson”. Well, to be absolutely precise, they have, with a scientifically recognised degree of certainty, discovered a new particle that looks very much like it could be a Higgs. But, lets not split hairs and congratulate CERN on an amazing discovery.

Of course the Higgs is important because scientists think that according to the “Standard Model” (the scientific theory covering the way the Universe hangs together at a fundamental level), it is the particle that gives the other particles mass. It converts the universe from a mass of random high-speed particle “soup”, to one with mass and structure, one capable of giving rise to suns, planets and of course life. For this reason, it has been misleadingly nicknamed the “God” particle.

The whole process though, did get me thinking. This famous “Standard Model” is a scientific theory that is quite a way short of being fully formed or proven in any sense. The discovery of the Higgs will certainly move the science on to a considerable degree though and so this uncertainty doesn’t stop the scientists believing in their theory and this, to me, looks very much like faith. Of course, this is not blind faith because through the maths and experiments, the scientists have got very good reason to think that they are working, pretty much along the right lines.

Believers have the evidence of history, personal experience and the experience of others though testimony and so faith can be approached with your eyes very much open. I think that the discovery of the Higgs Boson and other incredible scientific discoveries over the years show the Universe to be a pretty amazing place. I think it’s perfectly reasonable to believe that there is someone pretty amazing behind it all!

One thought on “The God Particle?”

Error: Twitter did not respond. Please wait a few minutes and refresh this page.